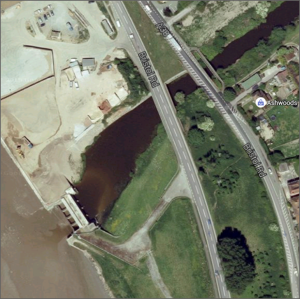 Two major schemes in Bridgwater to improve the flow of water in King’s Sedgemoor Drain and protect an important road bridge have been completed – just before the first severe storm of the winter.

Somerset County Council teamed up with the Somerset Rivers Authority to remove the foundations of the old arched bridge at Dunball which were left behind when the bridge was replaced in the 1950s. 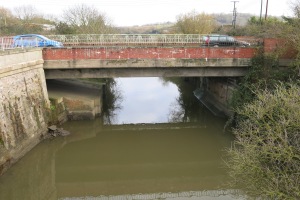 Contractors used divers to survey beneath the bridge before breaking up and removing the masonry. Work was complicated by working in and around water in the confined space under the bridge in close proximity to a sewer pipe.

The old foundations have long acted as a bottleneck beneath Dunball Old Bridge – which carries the A38 southbound – and made the water in the King’s Sedgemoor Drain more turbulent in times of high flow.

This turbulence has impacted on the Dunball New Bridge – which carries the A38 northbound and is a short distance downstream – by scouring out the foundations which could potentially weaken the bridge’s supporting pillars.

The foundations of Dunball New Bridge showing scour of up to 3.5m beneath the water. This has now been repaired.

While work was underway at Dunball Old Bridge, a second major scheme was in operation to protect Dunball New Bridge. This was a significant challenge, requiring underwater working to repair up to 3.5m of scour around the bridge pillars before strengthening the foundations.

Both schemes were completed last month, just days before the first significant storm of the winter hit Somerset on 19/20 November.

Cllr David Fothergill, Somerset County Council’s Cabinet Member for Highways, said: “This was vital work to protect the A38 – one of the key routes into Bridgwater and the main diversion if the M5 is closed for any reason.

“Although there was no immediate danger posed to either bridge, it was also clear that work was required to prevent greater problems in the future.

“It’s never easy working on bridges or around water with all the potential hazards that can entail, so full credit to all involved for completing both jobs before winter.”

Cllr John Osman, Leader of Somerset County Council and Chairman of the SRA, said: “This was a great example of two authorities working in partnership to achieve several goals at once.

“Not only have we safeguarded an important road, we have also improved the flow of water in the King’s Sedgemoor Drain which supports our long-term aim to reduce the risk of future flooding. These are both key objectives of Somerset’s 20-Year Flood Action Plan.”

Both schemes were funded and delivered by Somerset County Council and designed to tie in with the Somerset Rivers Authority’s proposed multi-million pound programme of works to improve the River Sowy and the King’s Sedgemoor Drain from Monk’s Leaze Clyse near Langport down to Dunball Sluice.