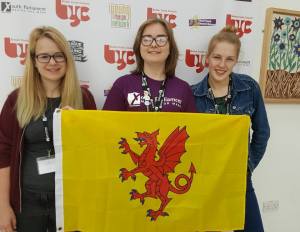 The Rt Hon John Bercow MP, Speaker of the House of Commons, opened the event and was enthusiastically welcomed by the delegates.

The Somerset MYPs said Mr Bercow was entertaining, honest and inspiring and he is a strong lead advocate for youth voice nationally.

The Somerset delegates were also moved by the final guest speaker of the weekend, Margaret Aspinall (the Hillsborough Family Support Group chairwoman) who has fought tirelessly for justice for the victims of the disaster 28 years ago.

The Young MYPs attended workshops and question time events, and they were able to raise key issues for Somerset – including Mental health, Equality and Diversity and a Curriculum for Life. As well as join in national debates about mental health and ‘Votes@16’.

The event also finalised plans for the imminent national ‘Make Your Mark’ campaign that is rolling out into Somerset schools, colleges and youth clubs this September. The Somerset Youth Parliament group is encouraging as many young people between 11-18yrs to vote for issues that matter to them in the ‘Make your Mark’ campaign. The top issues will then be debated at the House of Commons in November. MYPs will represent their own counties and finally vote on which issues to take forward in the next year.

The group had a challenging, fun and interesting weekend, arriving back in Somerset on the Sunday evening feeling both shattered and motivated!

Cllr Frances Nicholson, Cabinet Member for Children and Families at Somerset County Council, said: “It is so good that these enthusiastic and inspiring young people had the opportunity to be involved in national debates at the event. They were able to champion the issues that matter to Somerset young people on a national stage. I very much welcome their determination to campaign for what they believe in and look forward to seeing their hard work develop.”

You can find out more about Somerset UK Youth Parliament group and local campaigns at: http://www.somersetyouth.co.uk/club/uk_youth_parliament/59

To read more about this event and find out more about national campaigns and the British Youth Council go to: http://www.byc.org.uk